Grab your favorite mug outta the cupboard, fill it with hot cocoa and gather ’round the fire, as I tell you my tale of adventure into the Winter Wonderland that is the Ice Magic festival in Lake Louise.

My story begins as a teenager, growing up at home with my parents and younger sister. In our family, at the time, it was almost a nightly ritual to watch the evening news. Every January, I remember watching the news story about Ice Magic in Lake Louise. The carvings that were shown were absolute masterpieces done by masters of their art. Most of them were shown with night lighting; spotlights set up beneath the sculptures to highlight their brilliance. Seeing these magnificent works of art, I had always wanted to go see them for myself – the road conditions, however, proved to be the main obstacle in making the journey through the mountains while living at home.

Fast forward to 2017, and to celebrate Canada’s 150th birthday in 2017, Parks Canada decided to waive the cost of a Park Pass; one that typically costs about $60-70 for a single adult pass or $130-140 for a family/group pass. Tickets for the Ice Magic festival in 2017 were $10 – the second year in a row which saw a charge for tickets when it had previously been free. I opted to purchase my ticket online for the festival in order to take advantage of the free VIP shuttle service going from the town up to the chateau where it was held. This decision would prove to be most useful when I arrived in the town.

The Ice Magic festival itself is an annual week-long event that typically runs the last week of January. My ticket was for January 28th; a Saturday. The day itself couldn’t have been more perfect for a day excursion out to the mountains. It was warm in Calgary and I didn’t even bother to check the weather for Lake Louise; I was going, come hell or high water. After filling up the gas tank in my Jeep, I hit the road with my MP3 player hooked up for the tunes of my 2.5 hours (each way) road trip.

Once arriving in the town of Lake Louise, it was only about -3 Celsius and I entered the line for the shuttle up to the chateau. There were a couple of organizers letting everyone know the estimated wait time to get up to the chateau, “It’s about an hour and a half to a two-hour wait for shuttles,” they announced. Since it was about 1:30 PM, waiting in the long line would put me at the chateau around 3 or 3:30 PM. “Hang on a second,” I thought to myself, “aren’t I supposed to get VIP shuttle service?” After asking one of the organizers about it, I was directed to an alternate line for the VIP shuttle service and got on the very next one to go up. Lesson learned: get tickets online for Ice Magic and take full advantage of the free VIP shuttle rather than waiting outside.

After a short 10-minute shuttle ride, I began my journey through the Winter Wonderland of Ice Magic. The ice sculptures that awaited for me were nothing short of incredible.

The first stop, right at the entrance, was a piece that took 6.5 hours to create. When looking at all the intricate detail, it’s quite understandable how a piece this amazing would take some time to complete. 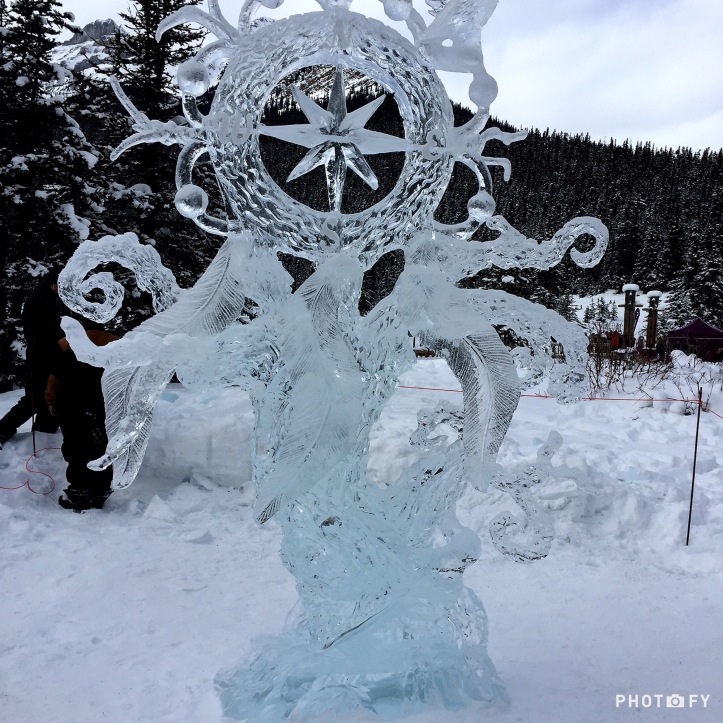 The next piece was done in the form of a Wolly Mammoth; it had the left side of the sculpture as an open doorway to the inside so that it could be hollowed out. I’ve always had a fancination with the prehistoric era. 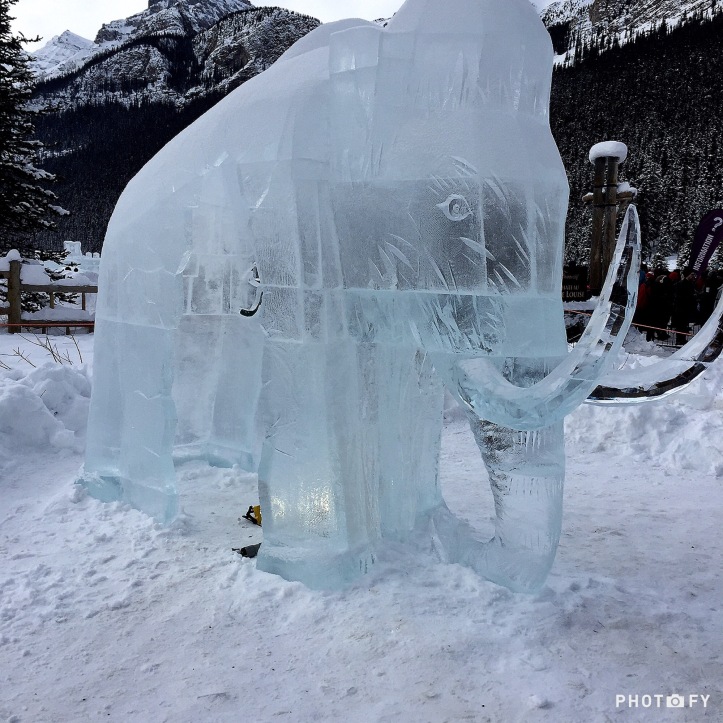 Both of the following ice sculptures depicted some of Canada’s various wildlife in action. Truly remarkable how they captured the water effects. 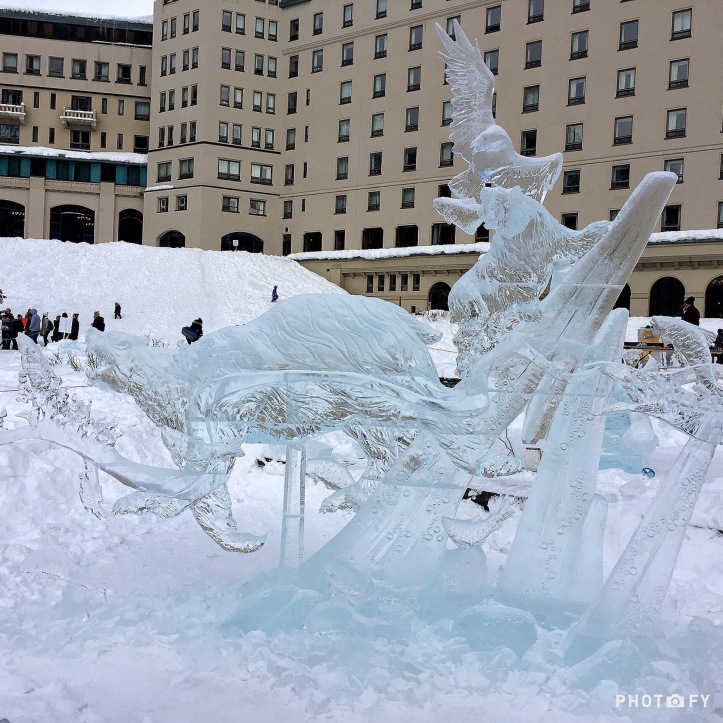 To commemorate and honor Canada’s 150th Birthday in 2017, the next two sculptures were made; one of them including some of Canada’s most iconic symbols such as the beaver and a hockey stick.

The next sculpture was truly an amazing sight to see since it was carved entirely out of snow! 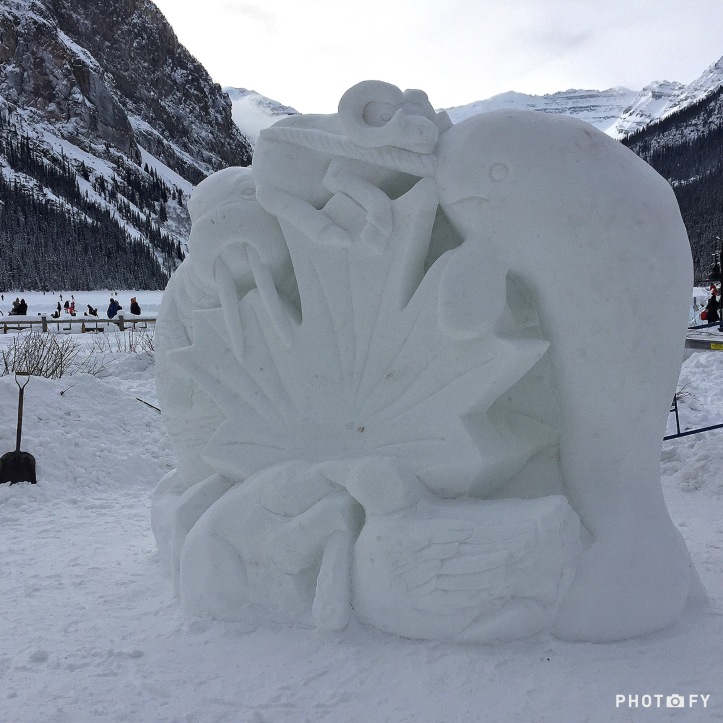 With a bow in one hand and a maple leaf in the other, a woman stands atop a moose in this magnificent piece.

This ice sculpture was done in honor and recognition of Canada’s Inuit culture and people.

As we near the end of my journey, an incredibly detailed ice sculpture of a buffalo, standing proud and keeping guard. 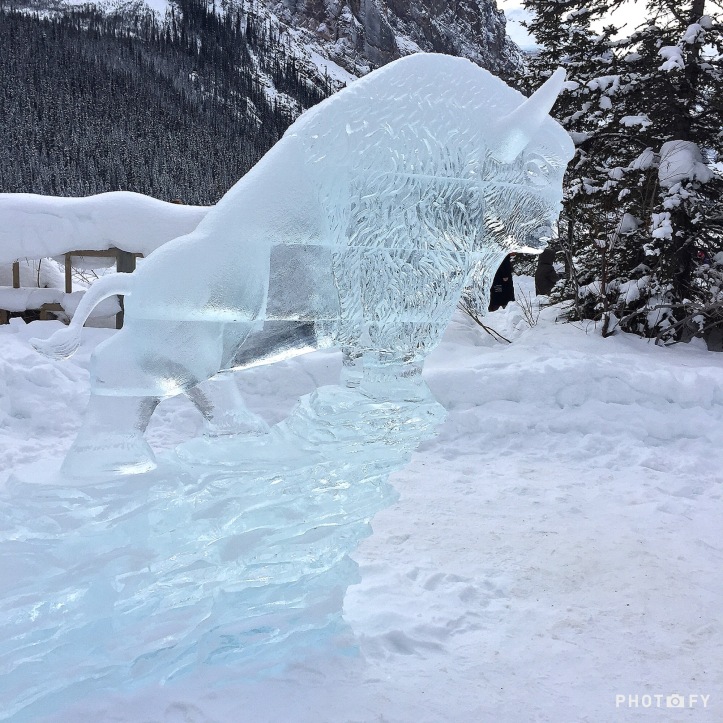 Saving the best for last, the pièce de résistance and national symbol, a Canadian Goose in the form of a compass. This final ice sculpture and its phenomenal detail is what made the whole trip worth while.

There are many other things to see and do during the Ice Magic festival. There’s ice skating on the open frozen lake (after going through an ice-carved entrance), sitting on an ice bench, multiple areas for some shinny ice hockey, sleigh rides, as well as snowshoeing and cross-country skiing trails.

After making my journey out to Lake Louise to partake in the Ice Magic festival, I think I might have to make this one of the things that I do every year. Being a romantic guy at heart, this is the perfect place for a romantic winter destination for other romantics out there. The backdrop of snowcapped mountains, snow covered evergreen trees that are incomparable in their natural beauty, master ice carvers, ice skating and a Magic in the air that you can feel; it isn’t just Ice Magic, this…is Winter Magic.

*All photos courtesy of Chad Pearen*